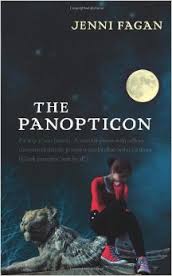 Sometimes I read a book that makes me feel uncomfortable in my cosy, middle class, average world.  It’s easy for me to be caught up in the day-to-day of my life and forget or ignore what goes on elsewhere, which is probably the same for many of us.  The lives and world described by Jenni Fagan in her debut novel, The Panopticon, is so far removed from anything I know.  It is a world often swept under the carpet unless there’s a massive scandal too huge to hide.  There can be a smugness (often unconscious, certainly in my case) among people like me (Guardian reading, home counties village dwelling), showing outrage, concern and shock when some social horror comes to light, only to go back to our Costa coffees and instantly forget the other world out there, maybe just down the road but out of sight and well and truly out of mind.

But Jenni Fagan’s book hit a nerve, it made me squirm.  It wasn’t only that I imagined the fiction and it made me uncomfortable, it was that my subconscious told me that the fiction was very likely close to the truth of life in care and it bothered me. Having read a bit about Jenni’s own story, I began to wonder whether she had lived through, heard about or witnessed situations similar to those experienced by her characters.  If so, I wanted to tell her how sorry I felt about that and offer (unqualified) support.  I questioned my motives for wanting to have this conversation and, once I was honest with myself, realised it was to make me feel better.  I would undoubtedly end the conversation, wiping my middle-class brow,  safe in the knowledge I was unlikely to be personally affected by such issues.   At this point I remembered a particularly telling line in The Panoptican, and I felt ashamed of myself.

The I can save you brigade are particularly radioactive. They think if you just inhale some of their middle-classism, then you’ll be saved

How ridiculous and frankly absurd of me to think that someone like me can “save” someone like the main character in this book.

Anais narrates her own story. She is only 15, but has lived through more than most people twice her age.  She’s lived in too many care and foster homes to bother continue counting, she’s also been adopted once, but things ended tragically.  She has no idea who her birth parents are. She knows no one she is related to.  She has no history or family point of reference and so often thinks she may be the product of some  dreadful ongoing experiment monitored by faceless men in broad-brimmed hats.  This is the paranoia Anais lives with.  She is taken to the Panopticon, a sort of last chance detention saloon for kids like her, after an incident involving a police officer.  She is covered in blood yet unable to explain why.  She is hard as nails, picking fights to claim her place in the pecking order of other forgotten kids, breaking the rules but trying to survive.

The Panopticon is a circular building allowing a view into every room/cell from an upper control floor.  Anais feels constantly observed; there is no privacy.  Her tragic back story slowly unfolds as her case is investigated and she contemplates her next move.  The panopticon’s lack of privacy becomes a metaphor for Anais’ life under observation.  She is monitored and reported on by various government departments and decisions are made on her behalf.  She is watched, but no one really sees her.

Fagan manages to pull off that difficult feat of making her character tough yet vulnerable, ugly yet admirable.  You want her to survive, but you wince at some of the stuff she does.  And despite the unreliability of Anais’ narration, somehow you know that the brutality and neglect she witnesses and experiences at the hands of various parts of society are probably close to the truth – “society” is also unreliable and fails kids like Anais.

This is a tough book to stomach, but utterly readable.  It made me think a lot about my own life and for that I am grateful.  An astounding debut.  Jenni Fagan was named as one of Granta’s best of young British novelists in 2013 and Scottish Author of the Year this year.   Her 2nd novel, The Sunlight Pilgrims is out now.  One to watch.

2 thoughts on “The Panopticon – Jenni Fagan”