Isolation is an odd thing; the loneliness of going unnoticed is equally as isolating as notoriety. Dave experiences both as he leads his lonely, uneventful and clean-shaven life, observing and sketching his neighbours while listening to Eternal Flame by The Bangles on constant loop.  He also knows the loneliness of being different and sticking out when inexplicably unstoppable facial hair starts growing into the evil beard of the title.

Stephen Collins has created a beautifully crafted cautionary tale rooted in the fear society constructs around difference.  Whether that’s anxiety about Dave and his freakish whiskers or the baffling dread of “There”; unvisited by and therefore unknown to residents of orderly “Here” yet identified as a place of chaos and disorder.

This delicately sketched graphic novel imparts deep messages about diversity, intolerance, partiality and suspicion of the unfamiliar.  The artwork is lovely and makes up for the emotions this sad and thought provoking read evokes.

No graphic novel reviews for nearly a year, then two come along at once!  I picked this up from my library at the same time as Dotter of her Father’s Eyes.  It was also part of the Costa Book Award promotion having been shortlisted in the novel category.  It lost out, as did Dotter in the overall award, to the unstoppable juggernaut that is Hilary Mantel and her book Bring up the Bodies.  Like Dotter, this book was a winner just for being nominated.  The book is a heartwarming, sometimes cringe-worthy but often smile-inducing set of scenes primarily between a teenager and his mother as they negotiate the seemingly endless weeks of the summer holidays.

Daniel Bagnold, 15 is supposed to be spending the summer with his father who lives in Florida with his new wife and baby, but plans change last minute leaving Daniel at home with his mum, Sue.  It’s a sad start but Daniel is glad he won’t have to miss six weeks of Kerrang! magazine after all.  “Don’t worry, son” says Sue to Daniel “We’ll have fun” and gives him a thumbs up – somehow you doubt it!  But what follows is a beautifully observed depiction of a mother/son relationship during those strange teenage years where neither feels understood by the other and so much is left unsaid.

Each facing page of six drawings is a vignette of their lives together during this six week period.  Some involve Sue thinking about her past life and whether her choices have been the right ones and how she feels about Daniel now and when he was younger.  There are some really poignant episodes which bring them together, but they generally negotiate the time together without much of consequence happening, but also without really sharing a great deal.  The relationship between Sue and Daniel is completely authentic considering there is little space and opportunity in six pictures to develop it.  But somehow Joff Winterhart has managed it.  He draws in other characters, such as Daniel’s friend Ky and his mum Astrid and again with little space and dialogue you instantly understand the relationships and set-up.

The drawings in Bagnold could be described as cruder than in Dotter, but no less effective; unfussy pencil drawings with little other detail in each frame other than the characters themselves, with the text in classic comic book speech bubbles or banners at the top/bottom of the frame.  Winterhart has sensitively captured the essence of this instantly forgettable pair (in his own words on the opening page), to make this a touching tale of mother/son love.  Well worth a read if you happen upon it.  My local library has lots of shiny new copies!

Check here to see several of the pages from Days of the Bagnold Summer.

Sorry I’ve been absent for over a week – not been well, but back up and writing now!

I happened to be in my local library the day the category winners for the Costa Book Awards were announced.  I had no idea which books might triumph in their categories as I had only read Life! Death! Prizes! by Steven May which was up in the novel category and subsequently missed out to the  seemingly unbeatable Hilary Mantel.  But only hours before the category winners announcement on 2nd January, I was browsing the shelves and noticed a lovely little display celebrating the Costa nominees, resplendent with brand new copies of all the nominated books.  Imagine – books with virgin spines, just asking to be cracked and you don’t even have to pay for them to do it!  Having just made my reading resolutions for 2013 I decided against borrowing any of the narrative novels on offer, but snatched up the two graphic novels.  Days of the Bagnold Summer by Joff Winterhart was shortlisted in the novel category and Dotter of her Father’s Eyes by Mary Talbot and illustrated by her husband Bryan Talbot was shortlisted and eventually won in the biography category.  It’s almost unheard of for a graphic novel to win a mainstream award, so it’s already a double win for them.  Will it go on to win the overall Costa Award tonight?

Dotter of her Father’s Eyes is beautiful before you open it.  The hardback has a lovely silky feel to it.  The cream cover featuring the pencil drawing of a little girl, the old typewriter font for the title and the splash of colour used for the author names made me want to dive in immediately.  It doesn’t disappoint.  As an aside, let me mention that ever since she’s seen the cover of this book, my 6 year old has insisted on having similar plaits in her hair when she goes to school and it does make her look so cute!

Mary Talbot’s father was an internationally renowned Joycean scholar, married to his research.  Lucia Joyce was the daughter of the famous Irish author destined for an early life of instability as her family moved frequently before his work found acclaim. 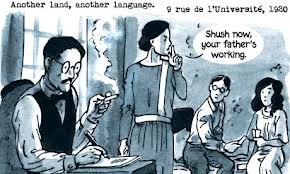 The stories of their formative years are intertwined with Joyce as the link.  Joyce and his wife had a profound affect on Lucia’s future as a dancer and independent woman and Mary Talbot’s father was so engrossed in his work as a Joyce expert that he often paid little attention to his daughter and certainly struggled to understand her.

This story is not just about how James Joyce affected the lives of these two women, it is also about the experiences of being a women at two different points in the twentieth century.  Lucia was born in 1907 and lived in bohemian surroundings, growing up with writers, poets and philosophers as constant visitors.

The illustrations that accompany the story are drawn by Mary’s husband Bryan who has illustrated many comics and graphic novels over the years.   The drawings bring his wife’s words alive, are fabulous to look at and full of animation.  Mary’s story is in sepia and Lucia’s in grey and white.  Mary’s story features splashes of colour at particularly emotional points which brings energy to the drawings and serves to highlight certain points.

I know graphic novels are not to everyone’s taste, but I love reading one every now and again, after all, pictures can tell a story equally well as words.  Although the narrative is sparse in a graphic novel, the reader is left to imagine parts of the story based on the pictures and I think this is good exercise for the brain!  It would be great if Dotter of her Father’s Eyes claimed the overall prize tonight at the Costa Awards but Ms Mantel is a force to be reckoned with, however you just never know with these things…

I don’t normally read graphic novels, this isn’t a conscious decision, they are not really on my radar.  As I mentioned in a earlier post, I have read a couple, they have tended to be high-profile ones though; Tamara Drewe by Posy Simmonds and Persepolis by Marjane Satrapi and I enjoyed them both.  I do know there is a lot of snobbery in the comic book world and among comic book lovers so I am not sure what sort of reception Craig Thompson’s newest offering, Habibi, has had among hard-core graphic novel aficionados.  I also don’t know a great deal about him other than it has been some time since he had a book published.  His last book, Blankets, came out some time ago.  I understand that Habibi took him something like 8 years to research, write, draw and perfect.  It is not surprising really, it is a monster of a book running to 672 pages.  But you don’t need to be a comic book geek to appreciate the gorgeousness of this book, the story and the artwork.

At its core, this is a love story, set in an unnamed, timeless desert state.  It focuses on 2 child slaves, Dodola and Zam.  Dodola is sold into marriage by her illiterate parents as a young girl.  She is taught how to read and write by her husband but this is also the beginning of her life in sexual bondage, but he is soon murdered by robbers and Dodola is handed over to slave traders.  While waiting to be sold on she encounters Zam, who is still a baby.  They escape the traders to live together and grow up in a desert hideout.  Dodola teaches Zam to read and write but mostly tells him stories.  They lose each other when Zam reaches puberty and both enter into a period of grim enslavement, she in a sultan’s harem and he with a rag-tag band of eunuchs.  They find each other in later life and try to make some sense of what has happened to them and start to put their horrific past behind them.  The narrative jumps backwards and forwards through their adventures, and tells the story through both their experiences.  At first this was a little confusing, but the lack of linear story telling makes it feel more like a myth or fairy tale.

That is a seriously simplified version of the story.  The real allure of this book is its visual loveliness.  Suffocatingly crowded market scenes, dreamlike giant angels and demons, rivers and deserts overflowing with rubbish and recurring pictorial themes of rain, fumes, liquid, numbers and arabic script.  Some motifs above doorways, on rugs and clothing occur over and over linking scenes, characters and the time periods of the narrative.  Craig Thompson clearly spent a lot of time studying arabic script and his use of it in Habibi allowed me to appreciate its beauty and versatility.

There are some ideological themes apparent in Habibi also.  The stories re-told, mainly by Dodola, serve to demonstrate the shared heritage or Christianity and Islam.  Familiar bible stories and their koran versions sit side by side reminding us of our common story-telling traditions and morality tales.  There are also questions regarding consumerism, over exploitation of natural resources and what we are doing to our planet by allowing ourselves to drown in our own waste.

It is an enormous book, with so much to look at, ponder over and maybe research at a later date.  But first and foremost it is a feast for the eyes.  Even if you are not a fan of graphic novels, you should check it out for its exquisiteness alone.