Not to be outdone by his little sister, my 9 year old now wants to do his first review! Of course, being the eldest he normally gets to do everything first, so this is a new experience for him!

Ever since he was small, my first born has been obsessed with books.  As soon as he was able to make himself understood he was always hassling someone to read to him.  His first favourite book was a picture book called The Enormous Turnip.  I would have to read it 3 or 4 times in one sitting complete with actions and slight mummy embellishments.  At the picture book stage we went through similar books to everyone else; Julia Donaldson, Maurice Sendak, Dr Seuss and Shirley Hughes.  We’ve read all the Roald Dahl books and the full Harry Potter series – he’s since read the HP books back to himself.  He owns many of the Terry Deary Horrible Histories books and those he doesn’t he borrowed from the library (which makes Deary’s recent comments on libraries all the more galling).

The HH series really turned him on to history and made me realise just how much he soaks up when he reads to himself.  When I was reading Wolf Hall a couple of years ago, he asked what it was about (intersted in the “Wolf” more than anything else I suspect).  I explained quite briefly mentioning Cardinal Wolsey and Thomas Cromwell. “Oh yes” he said, “I know who you mean, they both worked for Henry VIII” so I told him that I was at the bit where Wolsey had been arrested and summoned back to London “Oh well, he died on the way to London” said my son.  I nodded, not quite believing him, but only 15 pages later, sure enough Wolsey had met his end on his journey to London.

He is still a prolific reader, as are many of his friends, which sort of goes against everything you are told about boys and reading and it’s lovely that they chat about books too.  He loves all sorts of books for his age group and he is The Beano’s biggest fan, drifting off into Beanoland for 15 minutes every Saturday morning when the newest instalment lands on the door mat.

I very rarely read aloud to him any more, but every now and again he requests it and I love doing it; there is something very cosy about sharing a book.  The trouble with not reading to him anymore is I don’t really know much about what he’s reading, so it’s been lovely to chat to him this week about his current reading obsession, the Skulduggery Pleasant series by Derek Landy. 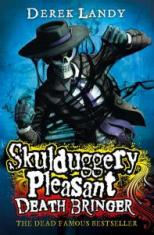 Me: I know you’re reading the Skulduggery Pleasant books at the moment, which one are you on now?

B: I’m reading Mortal Coil, it’s number 5 out of 7 in the series

Me: How did you first come across this series?

B: Some of my friends have read them and one friend recommended them, but I wasn’t sure at the time because for some reason I thought I wouldn’t get it, but then you brought the first one home from the library and I had nothing else to read  right then so I thought I’d give it a go.  I realised quite quickly that I liked it.

Me: Well that was lucky wasn’t it?  Can you give me a quick summary of what they are about?

B: The books are about a girl called Stephanie, who is taught magic by Skulduggary Pleasant who is a skeleton detective.  She learns all sorts of magic from him and then together they fight evil wizards, witches and other magical creatures.

Me: Ok, I must admit I’ve not come across a skeleton detective before, what does one of those do?

B: Well, Skulduggary works for the wizard and witch government..

B: ..sort of.  He solves crimes for them by finding clues and then fighting the bad guys

Me: And does Stephanie help him with this?

B: Yeah, she’s sort of his sidekick, but they are a team

Me: You know how in Harry Potter there’s a a theme of good v evil – is it the same with these books?

Me: Is there a progression of the story through the books or can you start anywhere?

B: I guess you could start anywhere, but it’s best to start at the beginning because everything you need to know to understand what’s going on is in the first 3 books

Me: Who do you think would enjoy reading these books?

B: They’re good for 9-11 year old boys or girls who enjoy books with adventure and things that are not quite real or normal

Me: What are you going to read next after this series?

B: I’m going to start a series called Time Riders which was also suggested by my friend, so I think I’ll give that a go

Me: What other great books can you recommend for 9-10 year olds?

B: The Alex Rider books by Anthony Horowitz or Young James Bond by Charlie Higson – those are both really great and exciting. If you want books to make you laugh you can’t go wrong with any book by David Walliams or The Giggler Treatment by Roddy Doyle.

Ta da!!! There you have it, brilliant adventure books for boys as recommended by my bookworm son!  Thanks also to Darren at The Book Zone (for Boys) who originally made me aware of Skulduggary Pleasant and Time Riders at a time when my son was looking for a new series to engage him.  If you have pre-teen/teenage boys he has great and honest recommendations.  Check him out.

4 thoughts on “My 9 year old does his first review”