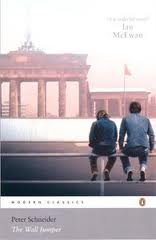 Next weekend Mr Fictionhabit and I are heading to Berlin for our special birthday treat and thanks to Englishman in Berlin we have lots of tips of what to do while we are there. Unfortunately, I haven’t done as much reading prep as I’d have liked, but I did read The Wall Jumper by Peter Schneider, a book set before the fall of the wall.

Berlin has long been a historically significant city, even now years after the fall of the wall it remains geo-politically important, albeit in a different sense than when this book was set.  Between 1988-90 I was studying  for my German A Level.  It couldn’t have been a more exciting time to follow the political and social development of that nation.  I remember being incredibly moved and emotional watching the events unfold during the autumn of 1989, culminating in that night in November when thousands of East Germans flowed through the crossing points into West Berlin to be greeted with hugs and cheers from their West German neighbours.  Of course the story didn’t end there, as the following year saw “die Wiedervereinigung”/reunification and the start of tearing down the social walls built up over the 28 years of a divided Germany.

Memories of these years were brought to the fore recently.  My parents are moving house and despite having had several clear-outs over the years, the most recent revealing a box of letters I had saved, cheerfully bound with different ribbon for each friend, they still have a few items belonging to me.  A large manila envelope landed on my doormat the other week containing some of my A Level work and exam preparation.  My mum thought I might like to keep it, bless her.

The essay is entitled “Deutschland – Eine neue Supermacht?” (Germany – A new superpower?) and I clearly used an article written in the Sunday Telegraph on 12 Nov 1989 to help me.  I got an A- and my teacher, David Ladd wrote at the bottom “I hope you can repeat this – if necessary – in an exam” a comment revealing he suspected me of having some help with the essay from German relatives!  I went on to get an A in my A level so feel slightly vindicated!  With my memory piqued I decided to pick up Peter Schneider’s book to take me right back to that time.

The Wall Jumper is a short novel at under 150 pages, but a fascinating insight into a nation divided and a useful observation of Wall anecdotes for generations familiar with the Berlin Wall as historical fact rather than the manifestation of the cold war itself.   It is certainly an absorbing lesson on what it must have been like to be German and living in Berlin during this time.  Schneider describes the collective German thinking during the initial years of the Wall:

…Once the initial panic died, the massive structure faded increasingly to a metaphor in the West German consciousness.  What on the far side meant an end to freedom of movement, on the near side came to symbolise a detested social order.  The view East shrank to a view of the border complex and finally to a group-therapy absorption with the self: for Germans in the West the Wall became a mirror that told them day by day, who was the fairest one of all.  Whether there was life beyond the death strip soon mattered only to pigeons and cats…

Although it is a novel, The Wall Jumper reads like a journalistic report, but it is this reportage style bound closely with the interesting cast of characters and deftness of anecdotal description, clearly based on personal experiences, that makes this book so easy and lovely to read.  The narrator, based in West Berlin, is gathering Wall stories from friends and family on both sides of the Wall.  Schneider uses a quirky and amusing device to link all the stories and characters; every time he collects a story, he re-tells it to the next person he meets, Schneider finishes each of these sections with:

(Character) listens carefully, thinks a while, orders a second round of vodka and beer, and then asks, without wasting another word: “Do you know the story about…”

The stories the narrator collects are primarily about people who defy the Wall and continue to move freely from one side to the other.  These stories are interesting in themselves as they are not the same stories most of us have heard about the Wall.  But chiefly this book is about what it means to be German.  There are a couple of incredibly perceptive passages near the end of the book that seem to capture the essence of this question.

…If I respond to queries about my nationality by saying without hesitation that I’m German, I am clearly opting not for a state, but for a people that no longer has a state identity.  At the same time, however, I assert that my national identity does not depend on either of the German states.  The same thing applies to the expression: “I come from Germany.” Either it has no meaning, or I am speaking of a country that appears on no political map.  By Germany I am referring neither to the DDR (German Democratic Republic) nor to the BRD (Federal Republic of Germany) but to a country which exists only in my memory or my imagination.  If I were asked where it lies, I could only locate it in its history and in the language I speak…

and when referring to the constant comparisons between East and West and which is better he says:

Certainly a piece of wisdom which can be applied to any spat between nations.

Undoubtedly, this is a fascinating commentary on life in Berlin before 1989, but it is also a beautifully written piece of prose and a real pleasure to read.  Credit must go to the translation by Leigh Hafrey, too often I’ve read books with iffy translation, but he’s done a great job with Peter Schneider’s text.

I’m going to finish this post with the most poignant sentence in the book:

PS If you are interested in finding out what life is like in Berlin today, please check out Englishman in Berlin